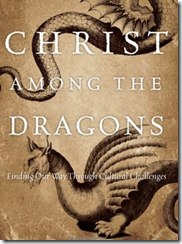 Orthodoxy. Dogma. Creed. Church. Religion. These words can evoke mixed feelings from those whose eyes wander across them. Even Christians, whose religion is shared, may react differently to a word like “Dogma” or “Orthodoxy.” One of the great questions of our Christian Age (and of any Christian Age) is this: “How are we to live?”

James Emery White addresses this very topic in Christ Among the Dragons. White properly distinguishes two approaches to this question that have caused great turbulence in our Church:

and the very opposite problem of:

2) An overly zealous tendency to focus too much on issues of little importance and to alienate those with which one disagrees on the details of Christian faith.

Christ Among the Dragons is a book that on some pages convicted me—for I had, myself, sinned against my Christian brothers and sisters in my denouncing them over certain details of our Faith. On other pages it caused me to nod my head with sadness—for I have been attacked for different opinions on non-central doctrines of Christianity. The book, in all honesty, led me to tears on both accounts, and led me to repentance and to forgiveness.

White begins with a chapter discussing the concept of “truthiness”—a divergence from absolute truth that has permeated our era. He then explores the concept of and need for orthodoxy. Orthodoxy, on White’s account, should be confined largely to “Mere Christianity.” White gives the illustration of Richard Baxter, who coined the term. Baxter was called upon to write about the “fundamentals of religion” for the government by Cromwell, and came up with a summary that “could be affirmed by a Papist,” as the complaint from Cromwell went. To this, Baxter replied, “So much the better” (p. 58). Baxter wrote, “Must you know what Sect or Party I am of? I am against all Sects and dividing Parties: but if any will call Mere Christian by the name of a Party . . . I am of that Party which is so against Parties . . . I am a CHRISTIAN, a MERE CHRISTIAN, of no other religion” (58-59). It is this Mere Christianity that White stresses Christians should embrace: an acceptance of the central tenants of Christianity (namely, belief in Christ as Lord and Savior, the Trinity, and the Resurrection), but this not at the expense of jettisoning other beliefs. Instead, we should not let these other beliefs divide and separate us.

White then goes on to describe the impact Christianity has had on the world. Then he explores the absolute necessity of Christian witness. Christians should never approach people outside the faith as needing to go to hell; instead, they are in need of witness (95). He finishes this chapter with one of my favorite quotes ever, from the atheist Penn Jillette: “If you believe that there is a heaven and hell and that people could be going to hell. . . . How much do you have to hate somebody to not proselytize?” (100).

Finally, White enters the section that I find most important in his book: an exploration of Christians’ attitude toward the world and toward other Christians. We should not approach non-Christians as enemies to be attacked, but as fellow creations of God, a God who loves them and who is calling them to Him. Our fellow Christians, likewise, should not be seen as enemies. White discusses what Christians should do about disagreements on doctrines in some quotes I simply must repeat:

“Truth be told, we should have enough theological humility to admit that we may all be wrong. The greater issue is refusing to make our theological viewpoint the test of orthodoxy, the agenda for which we exist and the basis of our community. . . . And our rhetoric isn’t helping” (126).

“Perhaps our criterion for deciding which is which [that is, which doctrines are essential and which are matters of liberty] . . . should be as follows. Whenever equally biblical Christians, who are equally anxious to understand the teaching of Scripture and to submit to its authority, reach different conclusions, we should deduce that evidently Scripture is not crystal clear in this matter, and therefore we can afford to give one another liberty” (127-128).

Meiderlin stated, “In essentials, unity; in non-essentials, liberty; in all things, charity.”

Christians of either of the two views outlined in 1) and 2) above tend to disagree with White here, but I think it is absolutely essential to take White’s words to heart:

“When we condescendingly say that our position is simply the ‘gospel,’ as if it’s not really a debate worth having, then we are being arrogant. When we make our view the litmus test of orthodoxy, or even community, we are being neither gracious nor loving. When we say that our view alone upholds God’s sovereignty or that our perspective is the only one that cares about lost people, we are not being truthful. When we exhibit a haughty smirkiness, or we so state our position that we divide churches, student ministry groups or denominations, then we are sinning” (126-127).

Christ Among the Dragons is one of the books I would consider essential reading for the Christian. It is a simple work that is never simplistic. White’s points are clear and relevant. Most importantly, however, I think many Christians will find, as I did, that his words will convict and comfort, his points will hit close to home, and Christ will shine through. I cannot recommend White’s work highly enough.

— Reviewed by J. W. Wartick.  J. W. writes on philosophy and theology at Always Have a Reason.

* Thanks to InterVarsity Press for providing a review copy of Christ Among the Dragons.

7 thoughts on “Book Review — Christ Among the Dragons”